5 FULL-HOUSE shows in NYC at NYU!

Previous Next
5 FULL-HOUSE shows in NYC at NYU!

For the second year in a row, we were privileged to perform at New York University’s Grad Alley Graduation Event in New York City! An event for over 10,000 people, where NYU blocks off several streets and locations by West Fourth Street, Washington Square East, Gould Plaza, LaGuardia Place and Schwartz Plaza to celebrate with graduates and their families.

We performed 5 full-scale magic & illusion shows in NYC at the beautiful Frederick Loewe Theatre… each show a complete full house of about 300 people! The theater’s audio and lighting technical crew were amazing (shout-out to them : ) and we turned the stage into a Las-Vegas style illusion show! Some of the illusions included a wooden crate floating in the air and then Lizzy magically appearing from inside it; Lizzy disappearing from onstage, and in an instant, appearing in the back of the audience; hanging upside-down in a straightjacket high in the air, attempting to escape the death-defying “Jaws”; and so much more! The NYU audience was fun and energetic, and myself, Lizzy, and the rest of the Extreme Team had a great time performing for everyone!

Here are some live show pictures from the day: 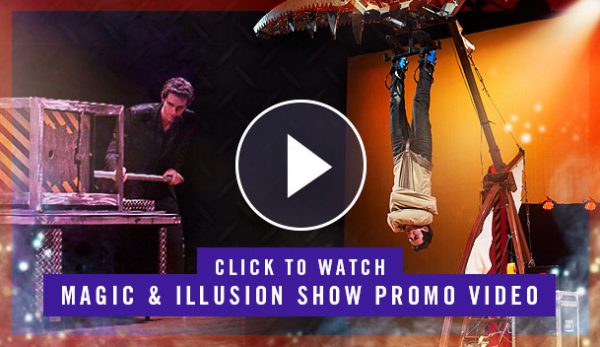